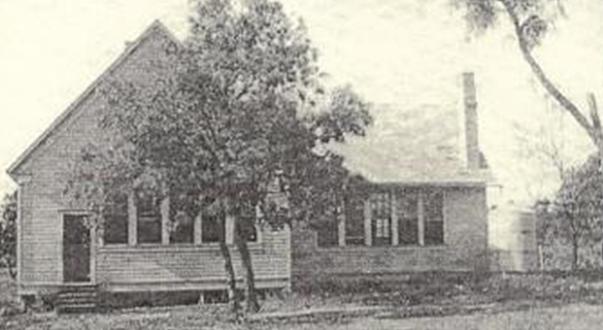 School in the early days

School did not begin in the fall until crops were harvested, and was delayed if rain prevented harvesting.  The goal was to begin the school year no later than September 15.  The school year ended in late May.  Most students walked to school, however there were a few who rode horses which were tied to the oak trees near the present culvert.

The children had a typical recess, about 15 minutes in the morning and again in the afternoon. The highlight of the day was when they played SCRUBB.  The children would eat their lunch as quickly as possible so they could rush to the baseball field.  The first one there got to choose his position; the second one chose next and so on.  This was because there were not enough students at the time to field two teams.  Once the batter was out, the choice position took his place and all the other positions rotated up.  Games played by the younger children were: Drop the Hankerchief, Red Rover Red Rover, Dodge Ball and Ring around the Roses.  Students would typically divide up by age groups at recess time.

Students brought their lunch.  Lunch bags or paper sacks were not readily available so most students had their lunches wrapped in newspaper that could be discarded at the end of their meal.  If they were lucky enough to have a paper sack they would take it home to be reused for as long as possible.  In about 1944-45, a lunchroom lady was brought in from Marble Falls to prepare lunches.  The cost was 10 cents or 50 cents for the week.  Two volunteer mothers would come in and help prepare the meals.  The meals were usually beans and potatoes.  Once the lunchroom was established, each child was asked to bring a plate and a set of utensils to be used during the lunchtime.  Once served, they would eat at their desk. Sometimes a volunteer mother would bring something from their own canned foods and this was a special treat for the children.

A big picnic was held after the last day of school.  These picnics go back to the early 1900's , and later evolved into what is now the Spicewood Homecoming and BBQ held on the second Saturday of June.  There would be washer throwing, horseshoes and always a baseball game.  After the picnic, most of the men would race their horses and/or have a rodeo.  In the evening there was a 3-act play  held under the tabernacle of the church.

History of The Spicewood School

The school was heated by a wood-burning stove and cooled by natural breezes.  A rainwater collection tank was located to the west of the building and supplied the students with water for many years.  The girls outhouse was located close to the present west fence and very near the present Church of Christ.  The boys outhouse was located on the opposite side of the property.  Several playgrounds were located around the school building.  The present kitchen area was originally referred to as the hall and there were cabinets and shelves where the current serving bar is located.  The text books were stored above, and basketballs, baseball equipment, etc. were stored in the cabinets below.  A temporary stage was built and placed in the east side of the front room, where plays were held.  It was stored underneath the building when not in use.  The school colors were green and gold.